At the end of March, myself and writing partner Frank Burton submitted an entry to the BBC Script Room (Bunk Mates; a post apocalyptic sitcom that was loosely based on a short comic strip I worked on some years ago with Paul Harrison-Davies).  Apparently a few other writer folks followed suit, as the BBC received almost 3,000 submissions (a third of which were also comedies). 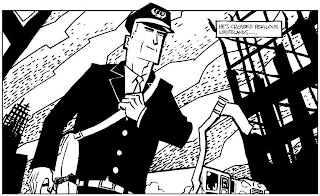 In July we were contacted by the BBC who informed us that our script was amongst the 5% that had made it to their long list.  In traditional English fashion, I put the kettle on and had a celebratory cup of tea and a biscuit (just the one biscuit, mind.  I didn’t want to overdo it at this stage).

The 150 scripts left were once again sifted through, and in August we were informed that Bunk Mates had made it to the shortlist along with 50 other entries (more celebratory tea for me, along with two biscuits - one of which was a chocolate hobnob).  We were given some useful feedback from one of the script readers, which stated (among other things) ‘Very funny and well written take on the 'post apocalyptic sitcom' – a theme that comes up often. Great opening with the postman, the juxtaposition of mundane and terrifying, which is then echoed in the script. The plot and pacing is well thought out and there are no lulls in the script.’

In October the BBC informed us that along with 25 other people we had made it to the final stage, and were invited to attend a development session at the BBC HQ in November. 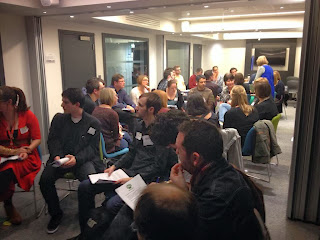 Anyway, we attended the session on Tuesday (if you look closely at the photo swiped from the BBC Twitter feed, you might be able to make out my bald spot in the foreground), and found it to be very informative and productive.  The most useful parts of the half-day were being given the opportunity to question producers from various BBC departments (such as radio, children’s tv, etc), and building up an action plan of where we want to go with our writing careers and how we intend to get there, with the aid of Development Producer Henry Swindell.

It was also nice to learn that all the comedy scripts have been sent on for further evaluation, which may in time lead to more feedback.  The chances of Bunk Mates actually getting developed at this stage are pretty slim (though not impossible), and it was repeatedly pointed out that the scripts should be considered more of a calling card of voice and talent.

As Paul Ashton puts it on the BBC Blog: ‘The real danger for that 1% is that they might think they’ve made it and the pressure is off – but they haven’t, and it isn’t. It’s just the first step on a long road.’   So…the contacts are there, and the BBC doors have both me and Frank’s boots firmly wedged in them.  Time to write some stuff! (but first, the kettle beckons…)
Posted by David Hailwood at 16:31