Well, crikey!  I've certainly been neglecting this blog, haven't I?  Mostly because I've been posting all my news on my other blog and forgetting about this little rascal.

In an effort to unify all projects/news/creative ramblings I've set up a lovely new website, complete with a blog that I regularly update.  You can check it out here:  http://davidhailwood.com 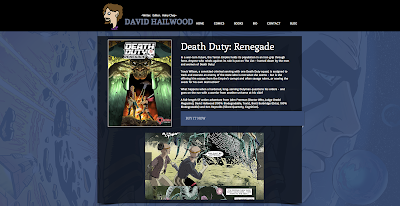 Posted by David Hailwood at 09:38 No comments:

Right then, here's a list of my latest creative endeavours.

Last week I finally finished writing The Last Of The Navel Navigators children's novel, which involves the adventures of a young Hillbilly with a magic bellybutton, who's travelling the universe with his goat, Brian (and was awarded a First, for my Creative Writing MA, a while back).

The comic version of Navel Navigators is also shaping up nicely, illustrated by the always awesome Brett Burbridge and lettered by Ken Reynolds. 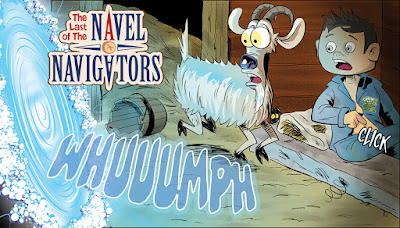 I've also just released issue 13 of 100% Biodegradable, which has a mass of talented creators inside, including 2000ad's Kek-W, John Freeman, Tony Suleri and many more. It's available here for just 69p: 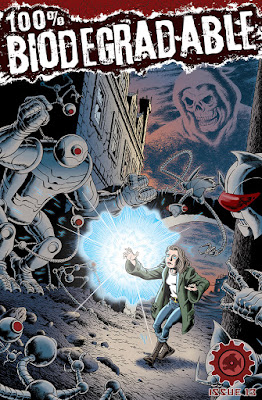 Then there's the Freaks, Heroes and Horrors comic bundle that I've just put together with the aid of some other hairy ne'er-do-wells (Neil Alexander, Chris Sides, Vince Hunt, Rob Jones and Jon Laight), and contains 18 comics for $3.50. 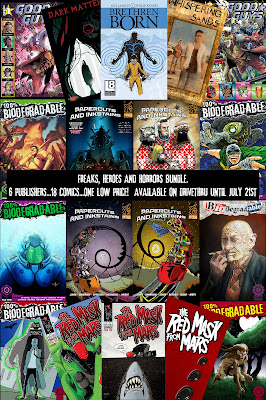 After script editing Jimmy Furlong and Andrew Hartmann's first Shit Flingers Bestiary (which you can read a review about here) Jimmy has hired me to script edit the second bestiary, which is next on my agenda. 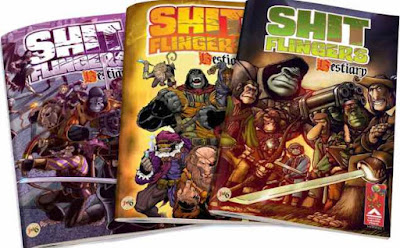 And now that the Navel Navigators novel is out of the way, I can finally finish off writing the last four chapters of Breaking Even (a sci-fi novel about an accountant on an overpopulated Earth who is discovered to have a planet growing in his head, which is just ripe for colonisation).

Considering everything gets a bit political in the last few chapters, there's plenty of real world shenanigans for me to draw upon for inspiration (it's actually quite cathartic, as I get to blow up Earth). 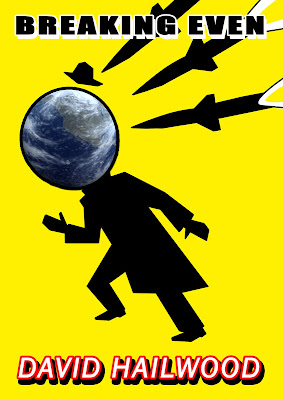 Posted by David Hailwood at 09:18 No comments:

Well now, since it's been six months since I posted anything on my blog, I best get on with some sort of update, eh?

Firstly, the British Showcase Anthology doesn't seem to be going ahead after all, so it looks like Meals on Wheels (Art by Tony Suleri and John Kirkham) won't be appearing in that one (though it'll probably appear in issue 10 of 100% Biodegradable). 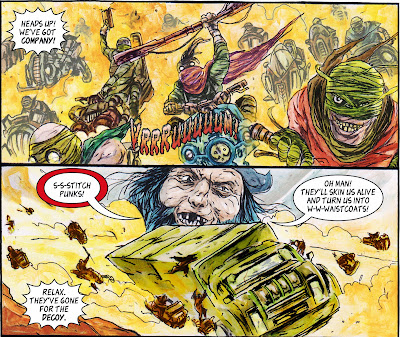 Also, Indie Comics Quarterly, who were set to publish Living The Dream (art by Tony Suleri and John Kirkham), have been very quiet over the past 6 months, so I'm guessing it won't be appearing in their anthology any time soon (on the plus side, it'll be published in 100% Biodegradable issue 9, due out next month). 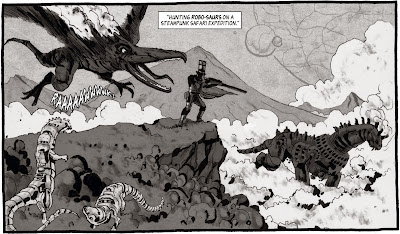 The good news is The Psychedelic Journal Of Time Travel is out now, featuring Everlasting Peace by myself, Tony Suleri and Ken Reynolds. 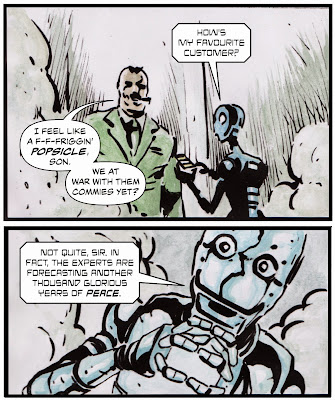 You can find out more here:  http://thepsychedelicjournal.blogspot.co.uk/2015/05/issue-5-is-live.html

Another project which is close to putting in an appearance is Mad Gods and Monkey Men, (by myself, Tony Suleri, John Kirkham and Ken Reynolds) for the upcoming Shit Flingers anthology.

These medieval swashbuckling supernatural simians were created by Jimmy Furlong and Andrew Hartmann.  The Kickstarter will be coming soon, but for now you can check out some of the amazing art from a whole host of talented creators here:

Slightly further on the horizon, I've had two strips accepted for the Steampunk Originals anthology (issues 7 and 8) from Arcana.  Since they've yet to publish issue 3 it might be a while before they appear, so here's a few panels from the strips in the meantime. 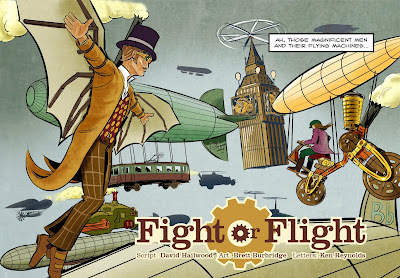 I'm also co-writing quite a few projects with John Freeman for his WarWorldz project (more on that at a later date), and editing my quarterly sci-fi comics anthology, 100% Biodegradable which is approaching its 9th issue.

So, rather busy then!

Posted by David Hailwood at 14:00 No comments:

This week marks the first birthday of 100% Biodegradable, the comic anthology that I edit and contribute to.

To celebrate, you can grab issue 1 for free on Comicsy until 1st December, or buy all 6 issues as part of a special DriveThru Bundle for less than $3.

Special thanks to all those readers, contributors, creators and reviewers who helped us get this far.  It's been hugely appreciated, and you've all really helped to make the comic a rather grand affair!

As of next year, Biodegradable will be going quarterly to allow me to focus on putting out a few one shots and mini series, and also attempt a print on demand collection of the best of issues 1-6.

But don't worry, there's still plenty of exciting material coming up next year.  In fact, have a quick peek at The Last Batch from Chris Sides and Dan Cornwell, for some hilarious booze-addled flesh munching action! 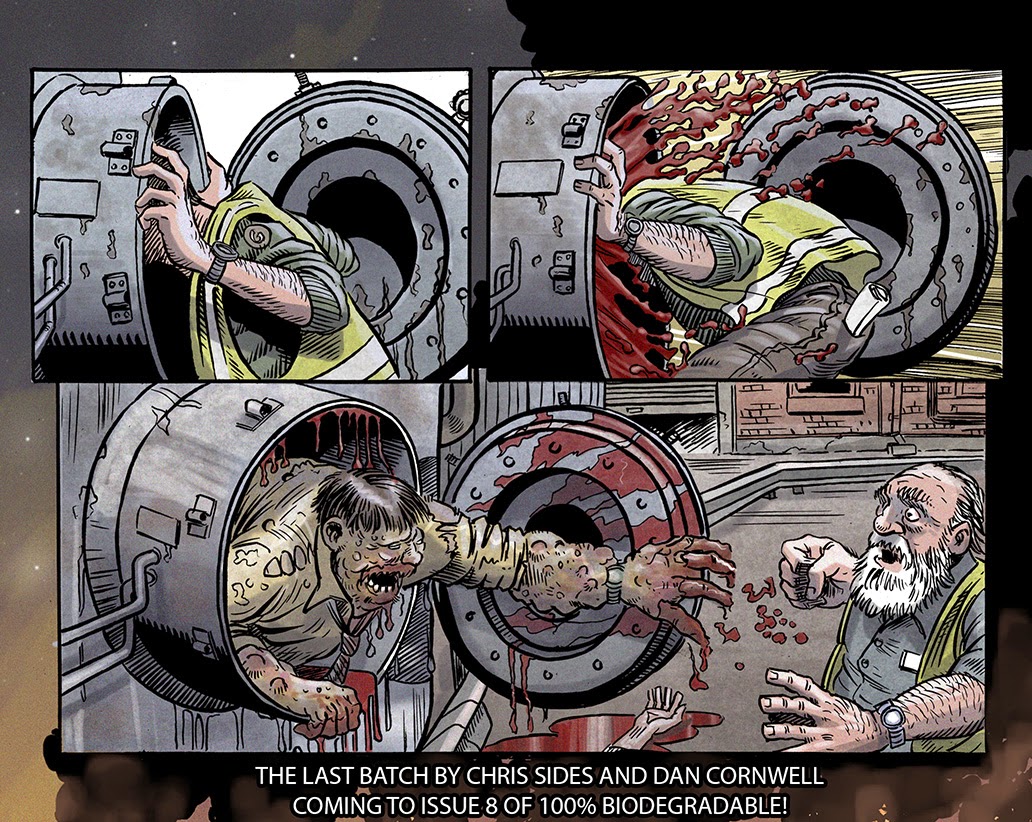 And keep your eyes peeled for issue 7, due out in December and featuring the likes of John Freeman, Alan Burrows, Chris Redfern, JT Pegg, Brett Burbridge, Tony Suleri and more!
Posted by David Hailwood at 10:17 No comments:

In support of Day Of Dredd, here's an old Dredd strip, illustrated by Stu Giddings and written by myself, which appeared in Zarjaz comic several years ago. 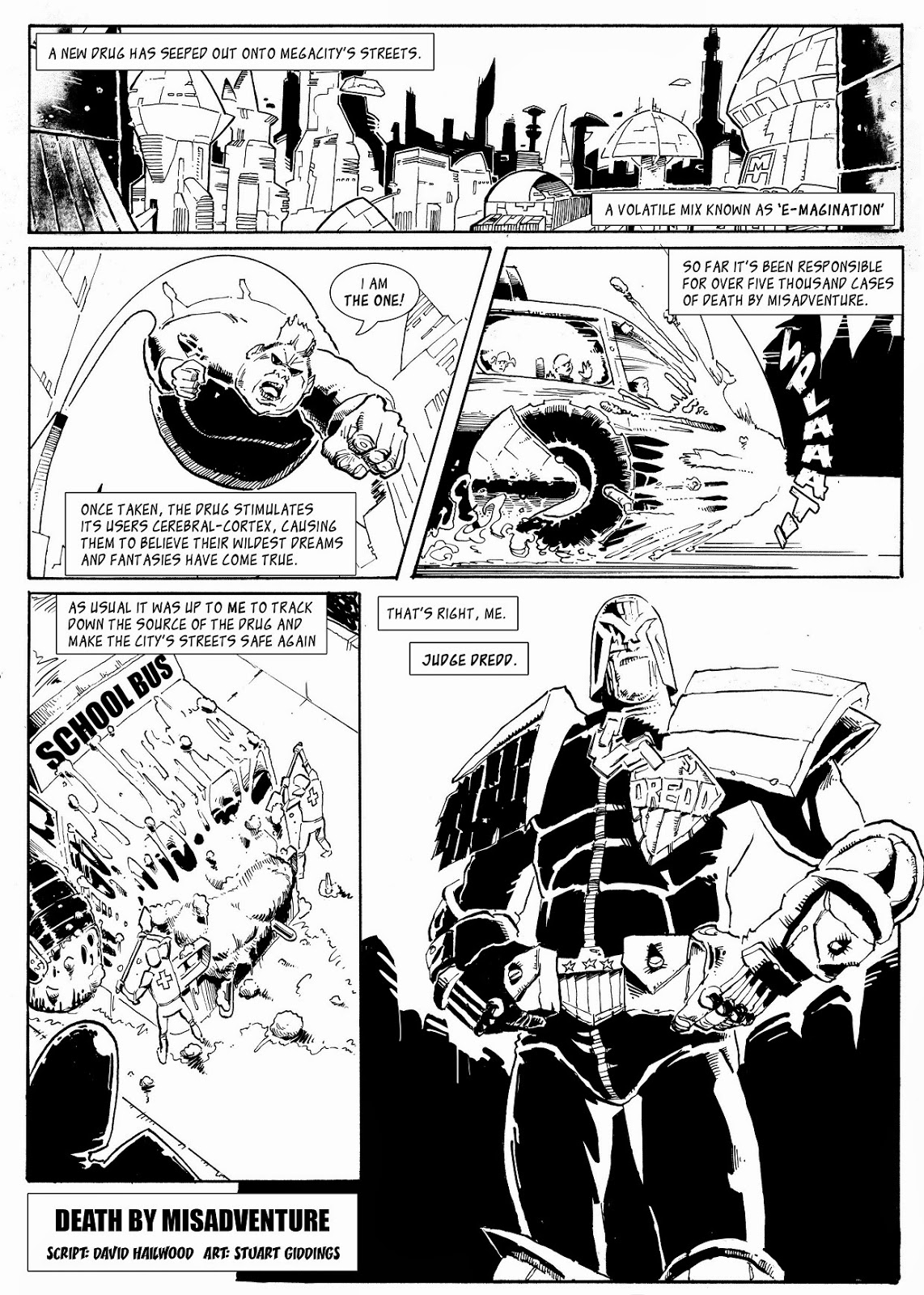 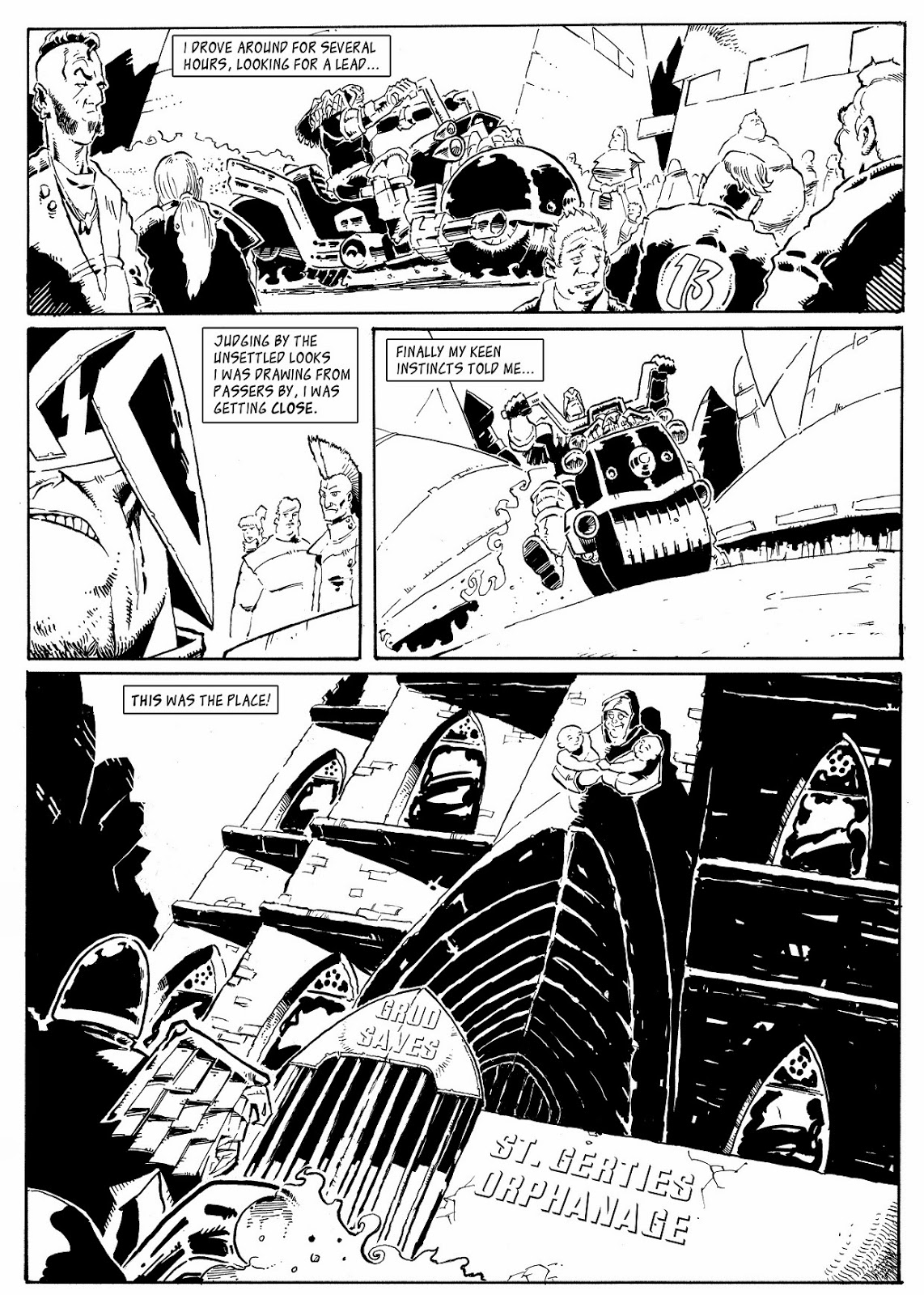 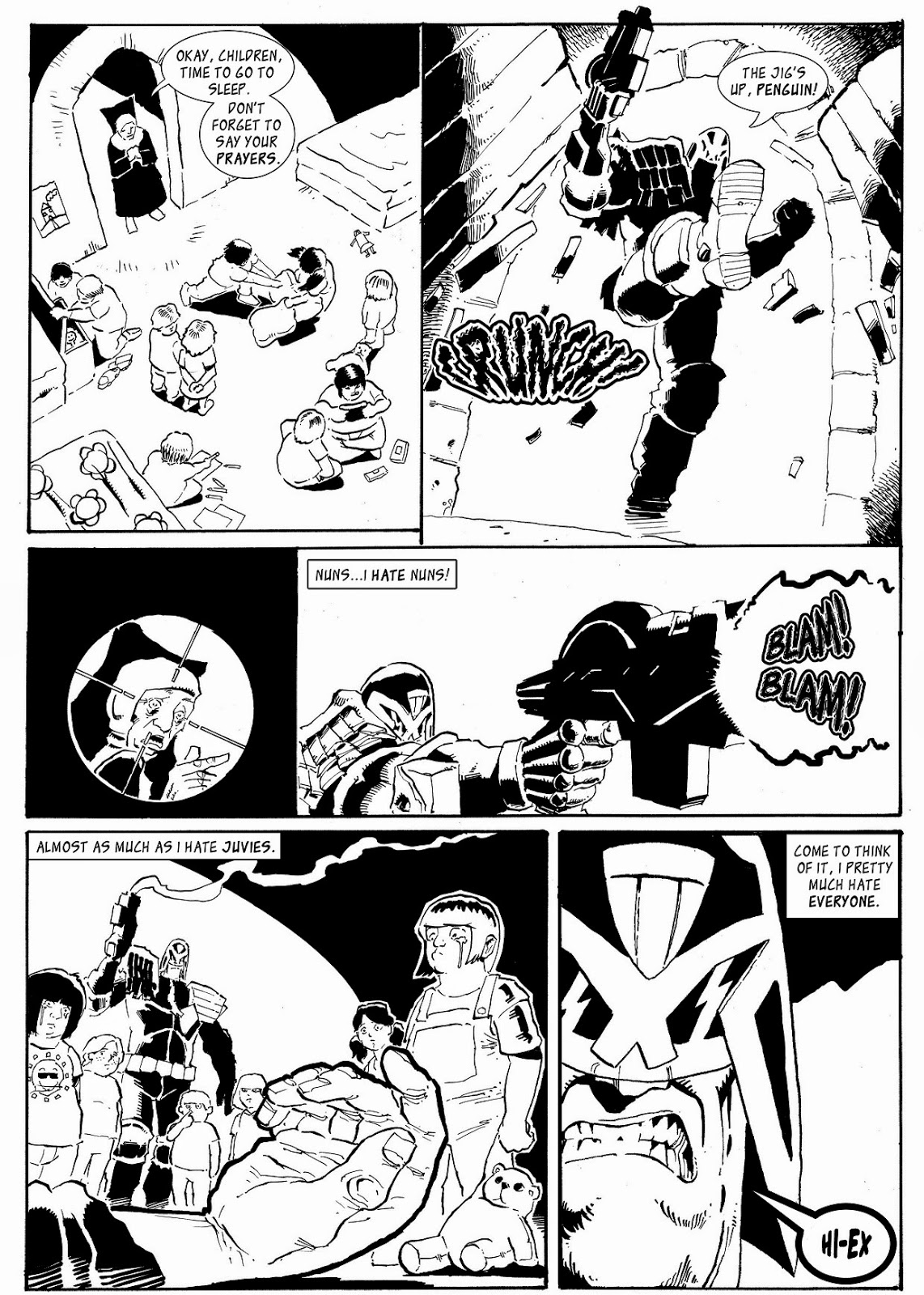 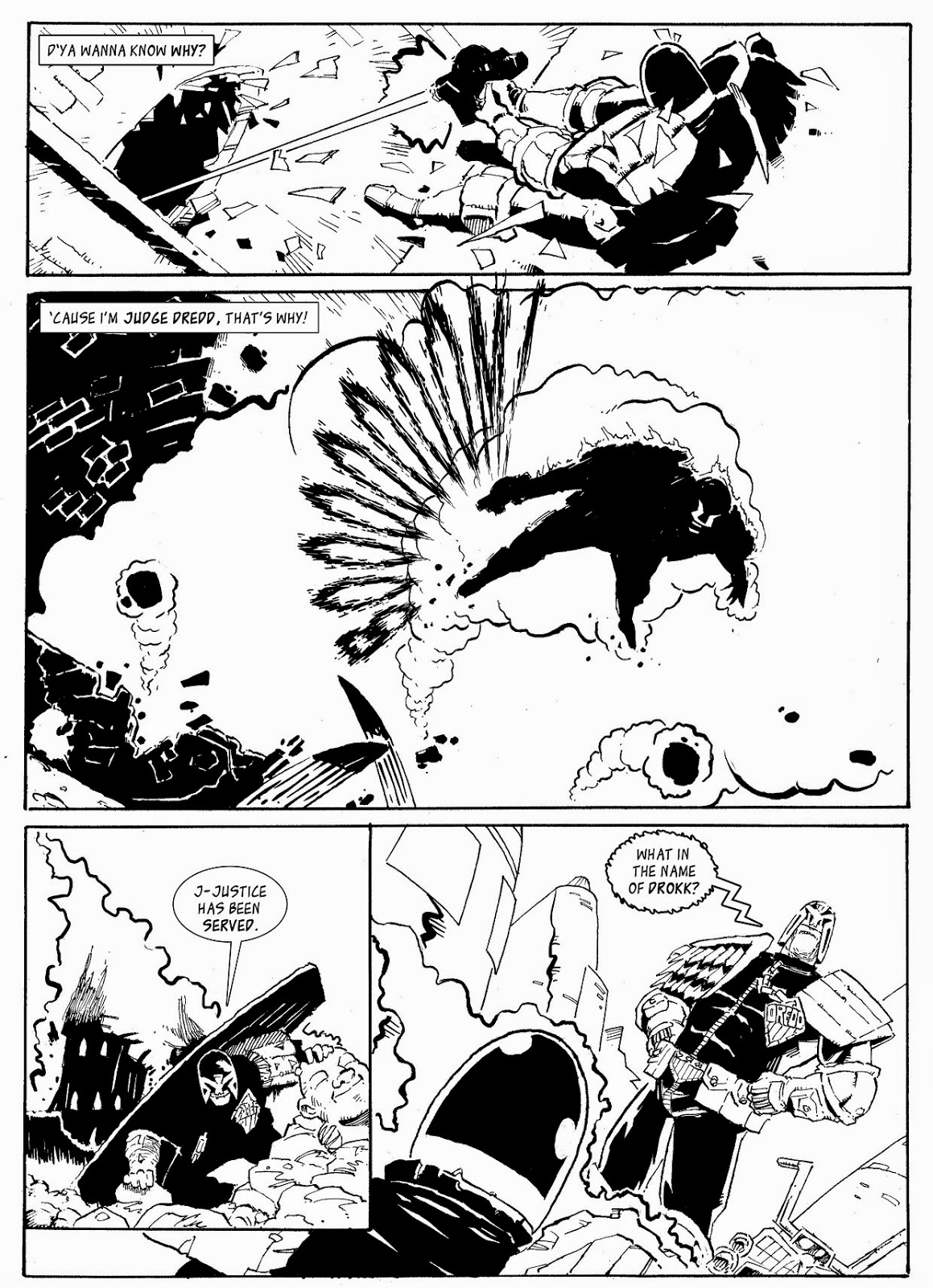 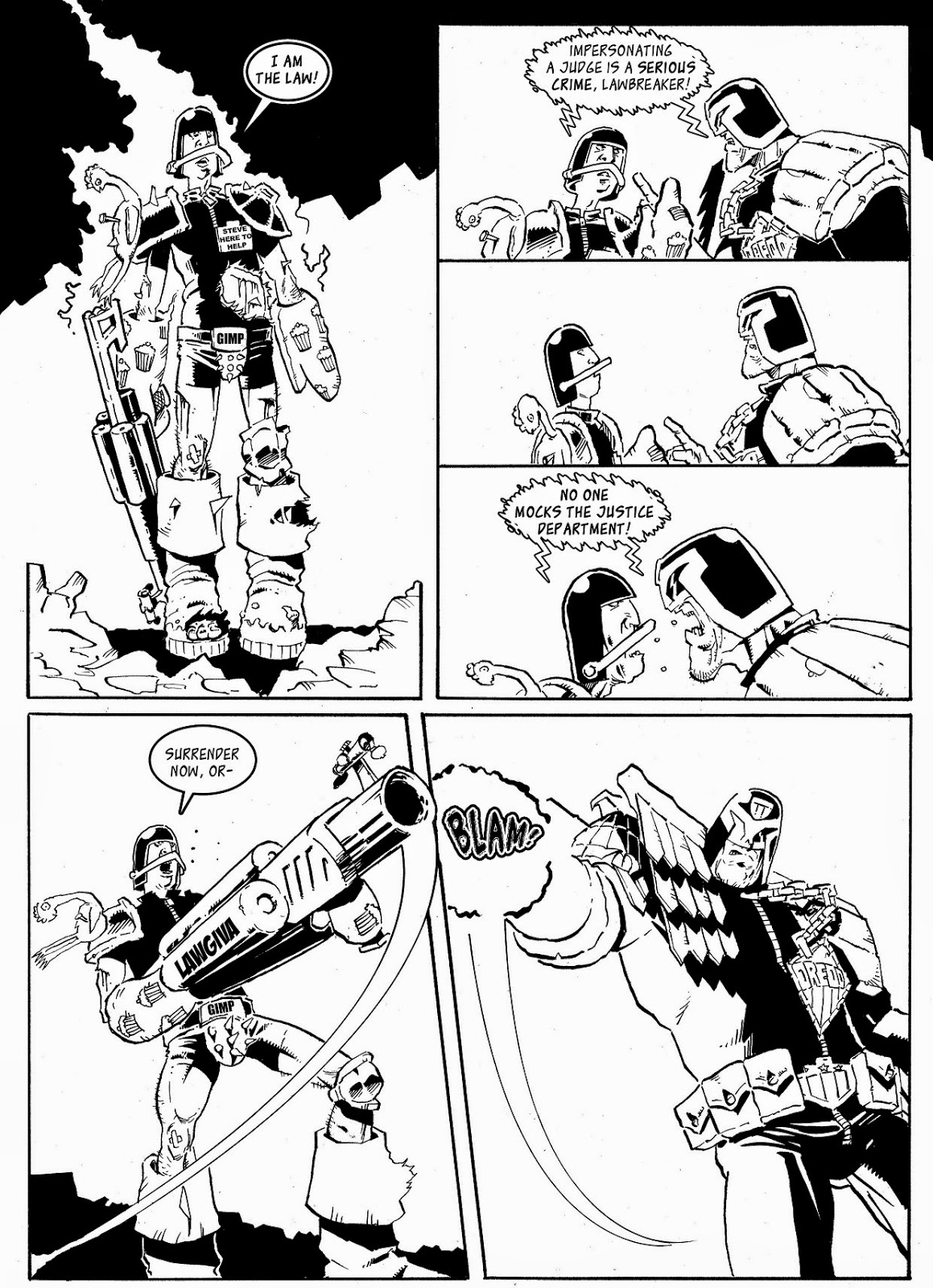 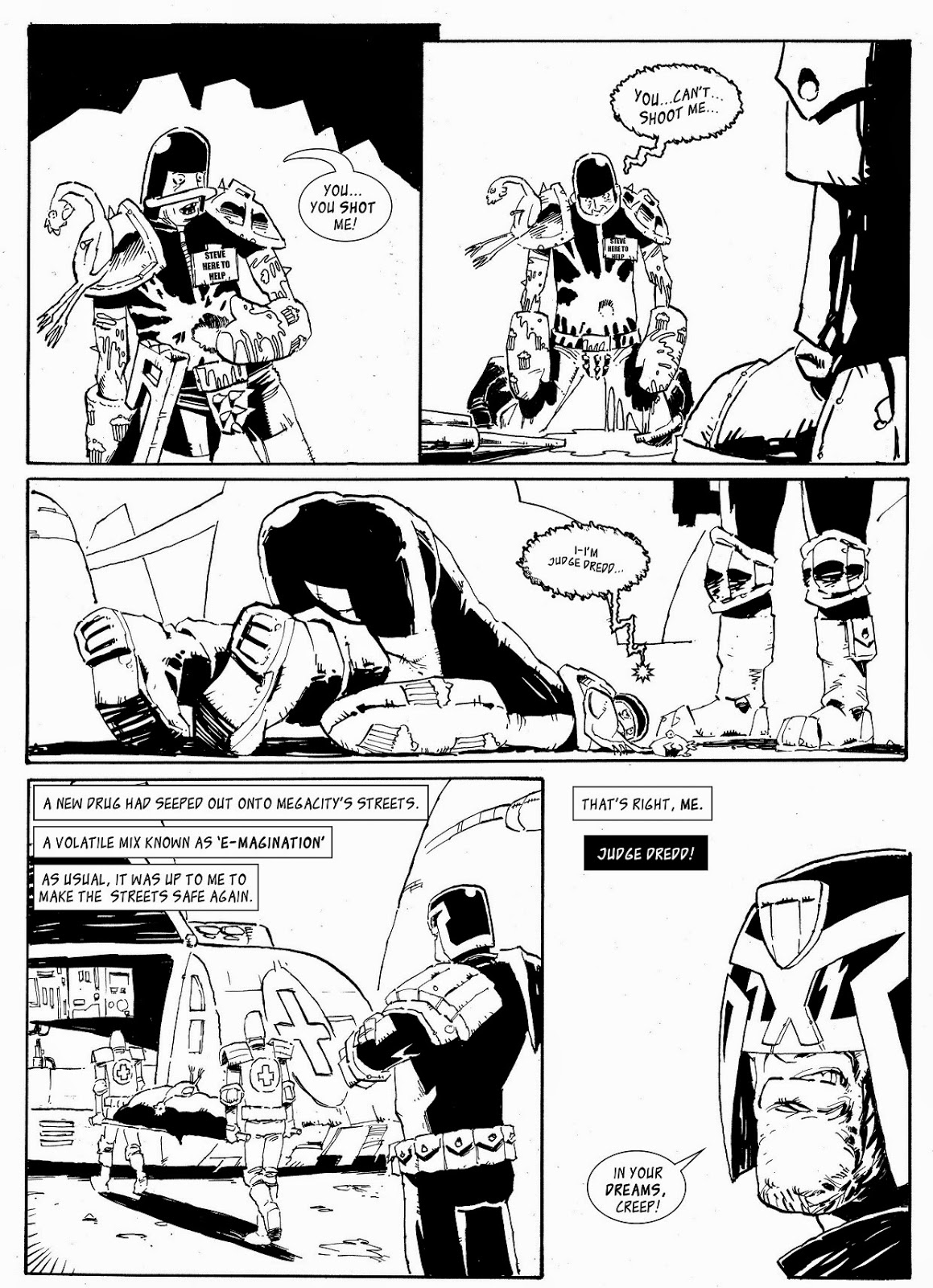 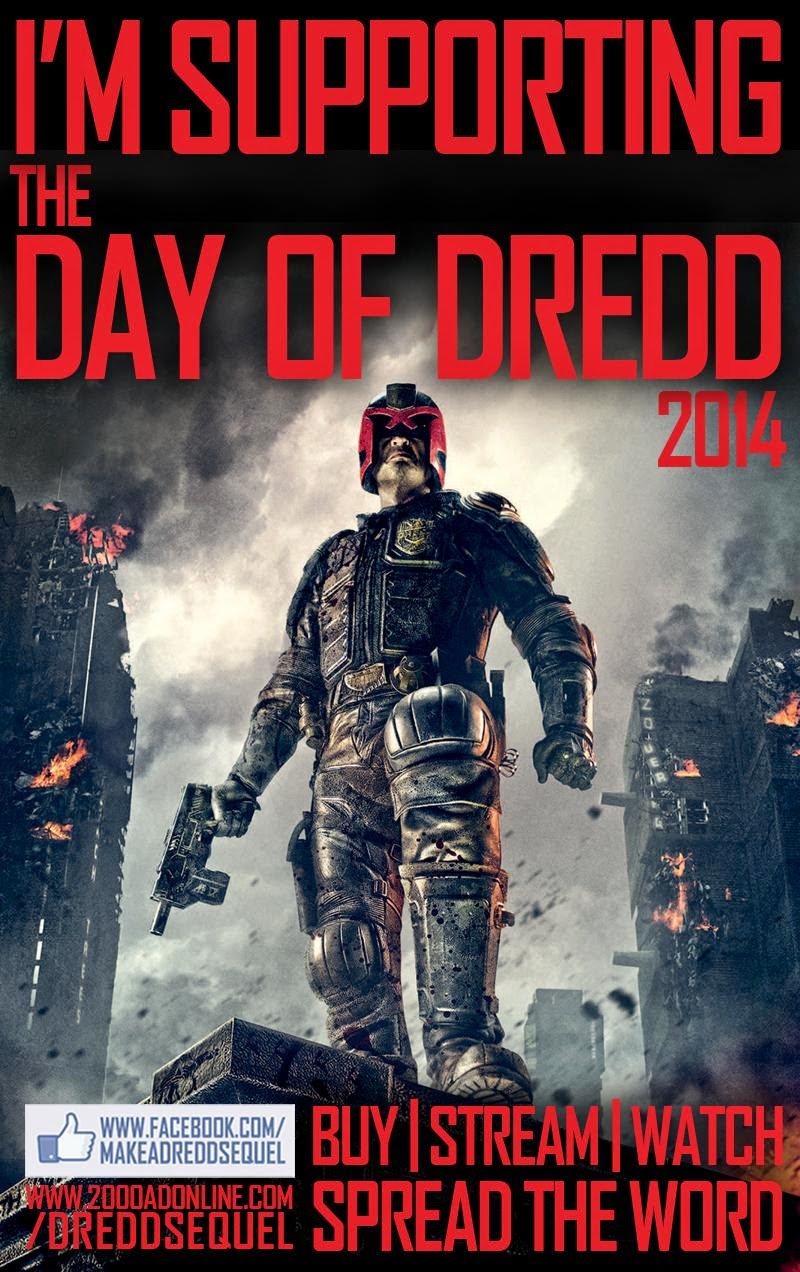 Other projects I'm working on.

So, as well as putting out plenty of my own comics, I've been submitting strips all over the bally shop!

I'm currently working on a ten pager (Mad Gods and Monkey Men) with Tony Suleri for Jimmy Furlong and Andrew Hartmann's delicately titled 'Shit Flingers' anthology.  The script has been accepted, and the art is in progress.  There's a hell of a lot of amazing creators involved in this whopper of an anthology (which involves swashbuckling supernatural simian shenanigans), so check out their Facebook page and give 'em a like.  With Tony having illustrated probably over 1,000 pages worth of monkey related carnage over the course of his comics career, he seemed a very natural choice to join the artists on this one!

They're still on the lookout for writers and artists, so if you're interested in getting involved, get in touch with Jimmy Furlong asap! 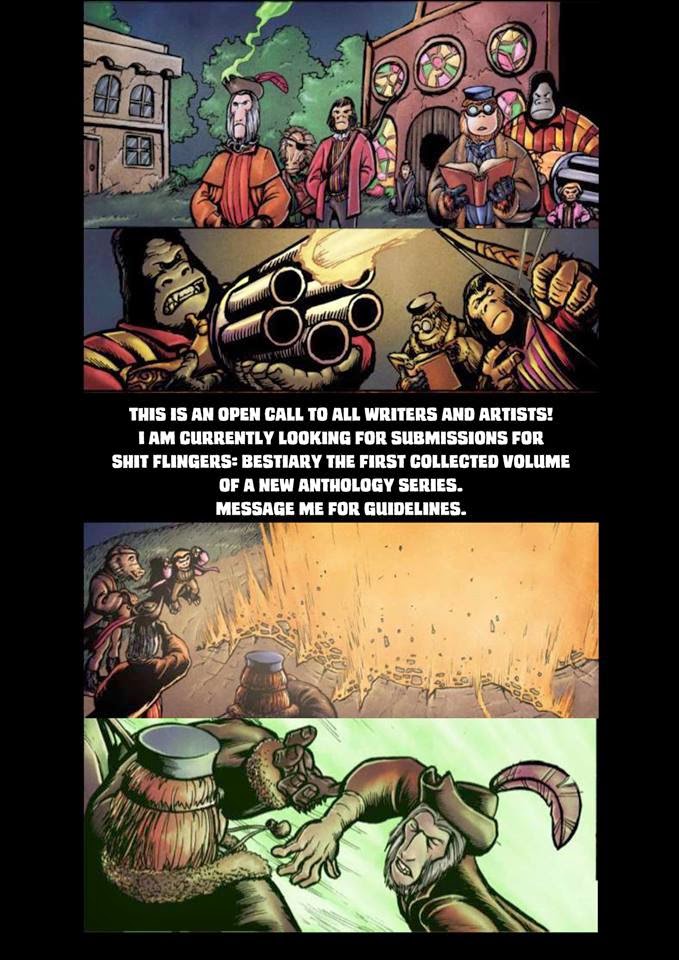 I've also had a 'Meals On Wheels' strip accepted into issue 2 of Markosia's upcoming British Showcase Anthology (subject to approval of final coloured artwork), also illustrated by Tony Suleri.  There's still a day or so left to get in a script submission to editor Adam Cheal, if anyone fancies doing so.  Hurry, hurry, hurry! 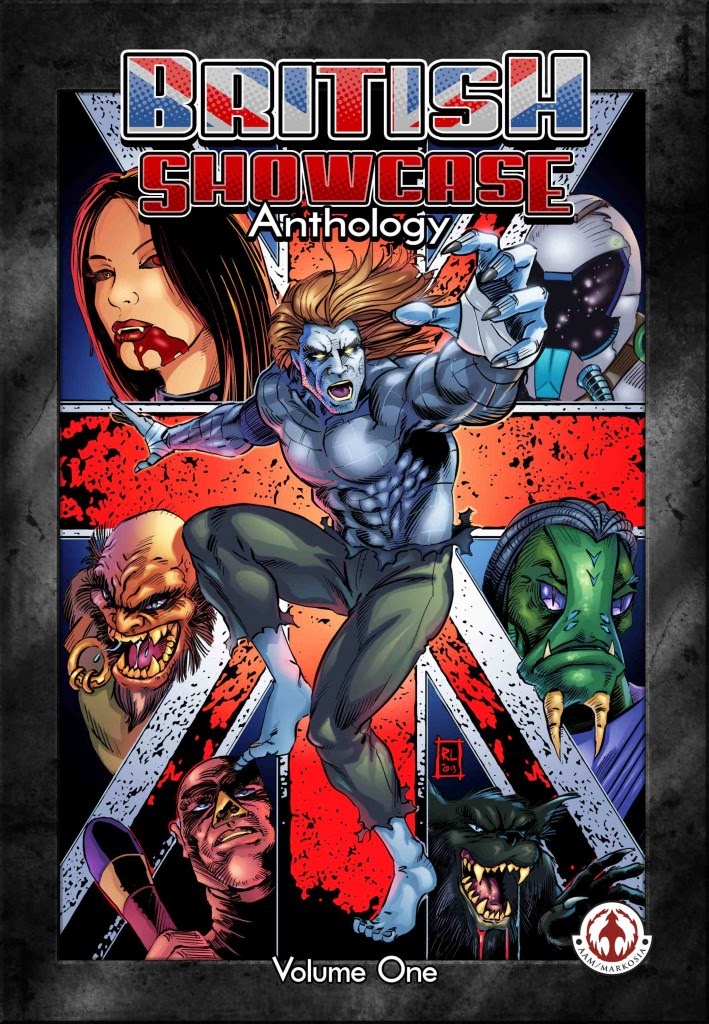 Next years issue of The Psychedelic Journal Of Time Travel will also be featuring a four page strip from myself and Tony (subject to artistic approval), titled Everlasting Peace.  It's a brilliant anthology full of highly entertaining strips, so it's great to be a part of it.  My first draft of Everlasting Peace was initially rejected for 'Hippy bashing and overuse of quiche' which is a fact that I'm uncommonly proud of. 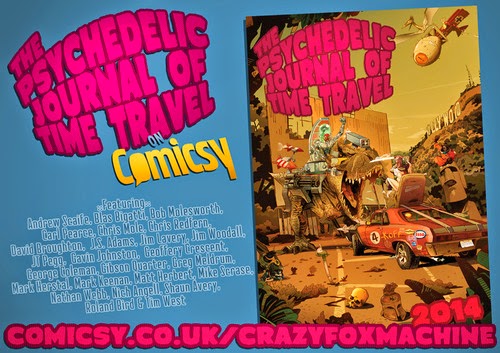 I'm also doing a few odds and ends for a couple of anthologies that Paul Birch is editing (which I'll mention more about when they're closer to release), and am currently working on a submission for Titan comics Lost In Space competition, to be illustrated by...Tony Suleri! (a huge surprise, I know...) 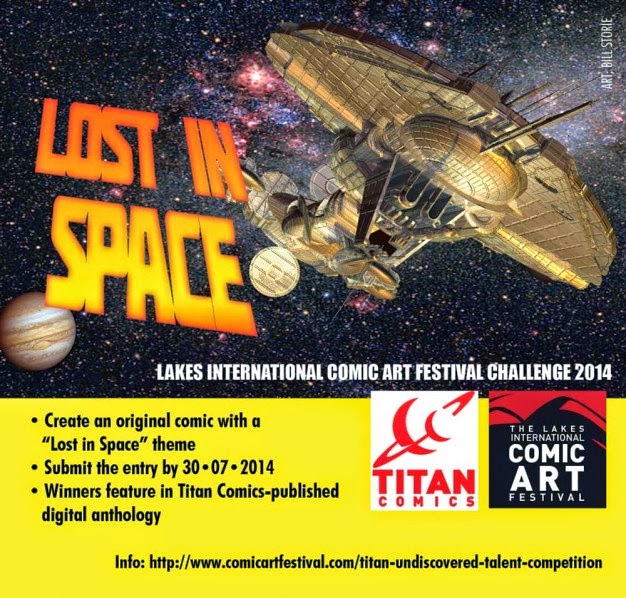 There's plenty more writing projects on the horizon, but I'm sure I've probably bored my one entire reader to tears by now so I'll mention them another time.

Right, let's get back to the joys of lettering!

Posted by David Hailwood at 11:55 No comments:

Work In Progress - the self published stuff

Since I'm involved in rather a lot of projects at the moment and we're at the mid-point of the year, I thought it was probably about time that I started mentioning a few of them on this blog.  I'll probably split this into several posts as there's so damn many of them, so let's get started with the self published comic stuff!

As well as putting out the bi-monthly sci-fi anthology 100% Biodegradable, which is gearing up for its fifth issue, I'm also working on a few one shots and mini-series with Tony Suleri. 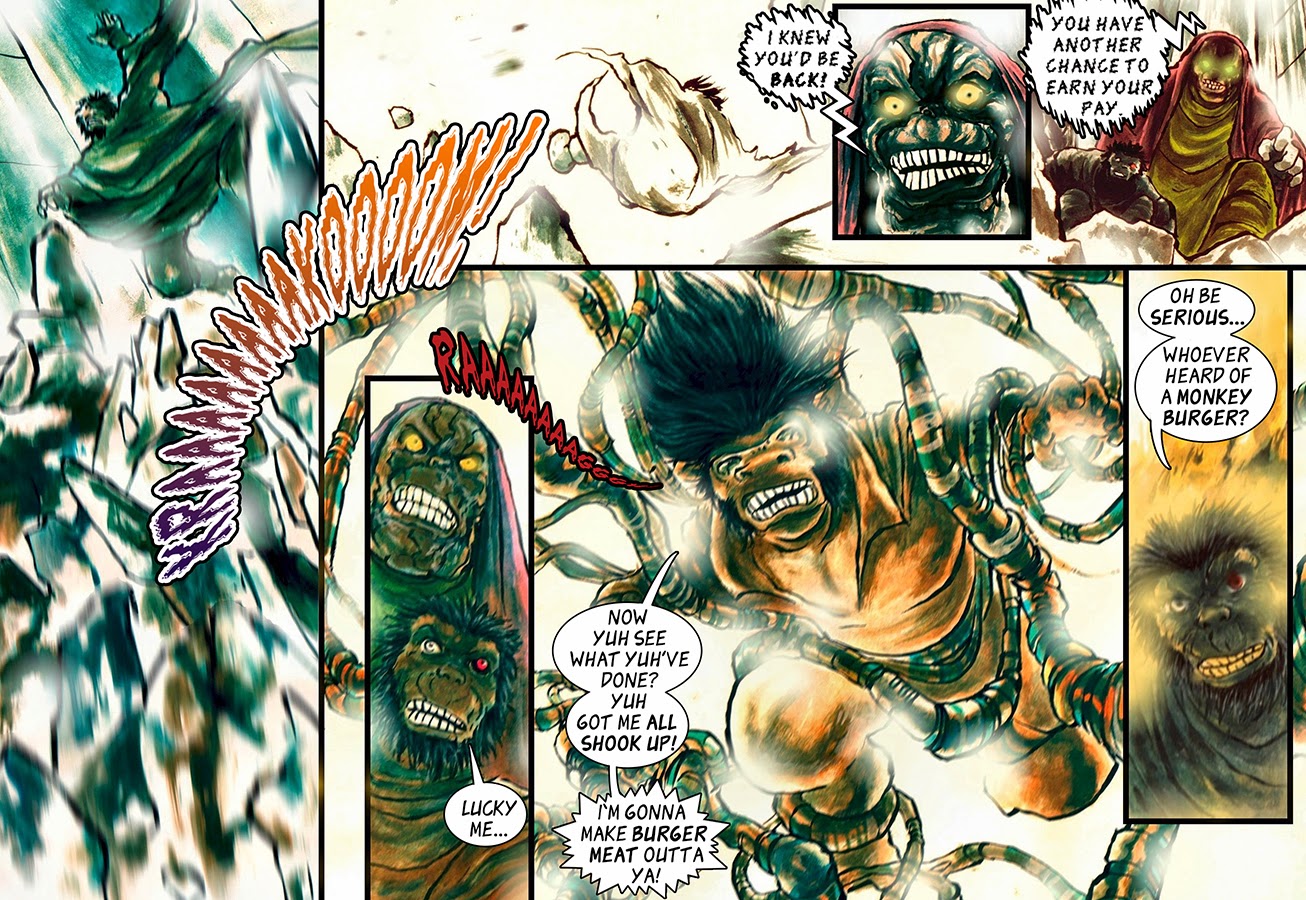 The comic also features an eight page 'Faceless' backup strip illustrated by Dave Thomson, involving a headless psychotic robotic assassin with a liking for cartoons and chocolate bars (except Toblerone.  He's not too fond of that) 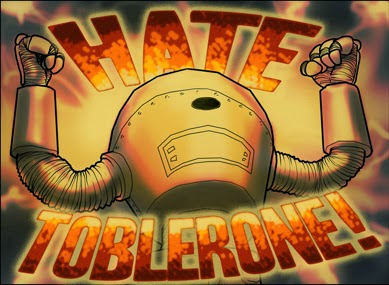 I'm also working with Tony Suleri on a one-shot Marren Kane comic, titled 'Matters Of The Heart'.  The artwork has been coloured and completed, and I just need to letter it all (whilst coming up with the script at the same time, since Marren Kane is always completely unscripted). 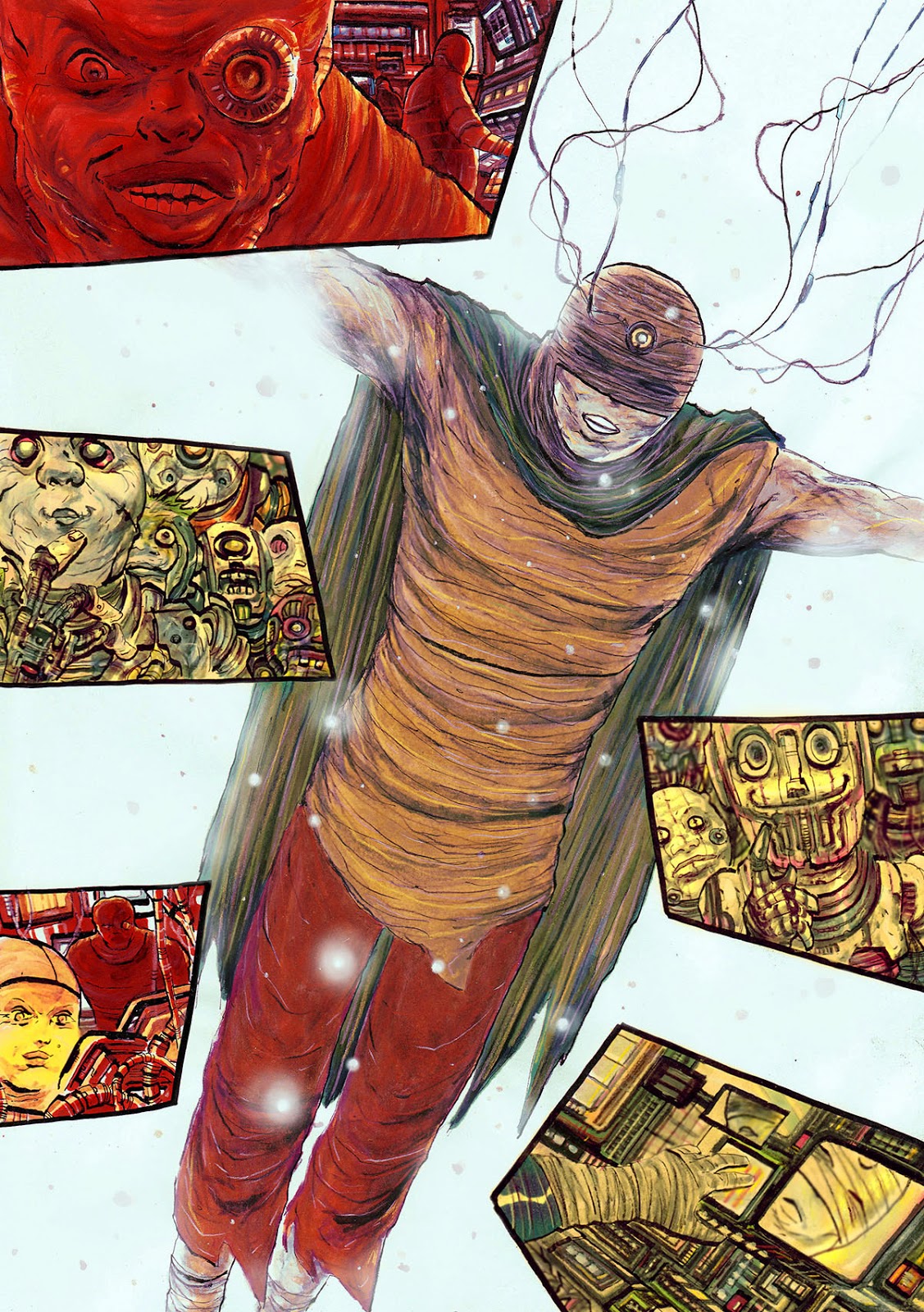 It'll be nice to get this one finally out there, as the first nine pages were given out as a freebie at BICS in 2008.  The mighty Tim Perkins of Wizard's Keep even provided a few Marren Kane sketches for people who visited the Bulletproof comics stand (Marren was originally geared up to become Bulletproof comics flagship character, but unfortunately due to a change of editorial priorities the comic folded after issue 2.  Marren now appears regularly in a series of self contained adventures in the 100% Biodegradable anthology, which can be purchased here). 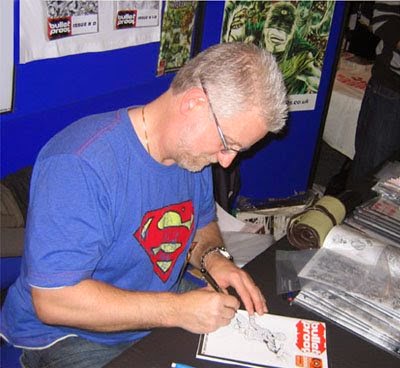 (Photo of the marvellous Tim Perkins in action, by Lew Stringer)

Technofear is another large project with Tony Suleri that's been in the works for quite a while.  We self published issue 1 (of 3) probably ten or so years ago, and Tony has been patiently slogging away at parts 2 and 3 between his many other projects.  Part 2 is now completed, and once 3 is underway we shall look into relaunching the comic as a digital title.  The series features ape bounty hunter Pubba Gintaro as he undertakes a mission to bring a deadly Technomancer to justice, and comes up against zombies, cybernetic vampires, a bigoted police force and a whole host of lethal technology that's out to kill him. 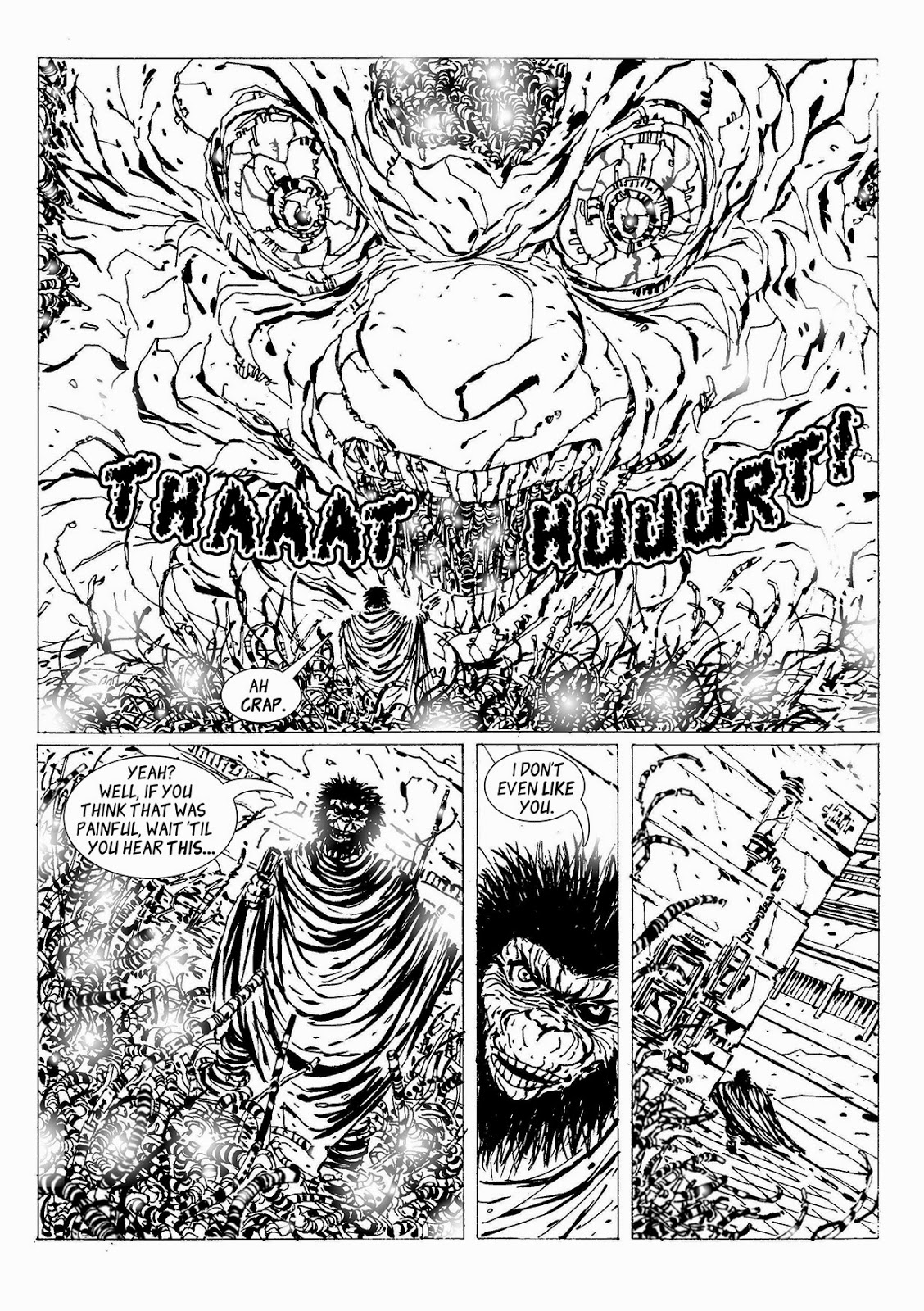 Me and Tony are also working on a kung-fu zombie mini series; I'll mention a bit more about it when we're further into the project (the artwork for part one is almost finished, but I still have to write scripts for parts two and three).  For now, here's a teaser image.

Posted by David Hailwood at 10:56 No comments: