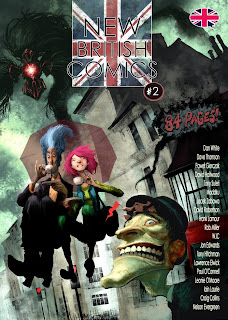 The second issue of New British Comics, an anthology published in both English and Polish, is out now to buy.

As well as featuring Spare Parts by myself and Tony Suleri (a jolly old romp through the sewers with severed limbs and cannibals aplenty!), there's a whole wealth of other comic strips and cartoons by some rather talented chaps and chapesses, including Dave Thomson, David Robertson, Paul O' Connell and Leonie O' Moore. It's 84 pages in size, comes under a terrificly English colour cover by Nelson Evergreen, and is rather marvellous stuff indeed!
Editor Karol Wisniewski had done a fine job of assembling the issue, and there's very few weak strips and plenty of black comedy which certainly kept me amused.
If you're interested in buying a copy, or learning more about the creators, more details can be located here: http://newbritishcomics.blogspot.com/
Posted by David Hailwood at 16:48