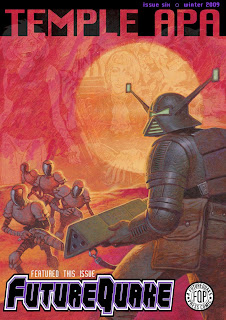 After a slight delay, Temple Issue 6 is now available to download at:
http://templeapa.ning.com/forum/attachment/download?id=827304%3AUploadedFile%3A15168
With contributions from Tony Suleri, Simon Mackie, Malcolm Kirk and others, the 97 page showcase also contains a 26 page feature on the work of Easmall press publisher Futurequake Press.
This is John Kirkham's final issue as Central Mailer (damn fine job, dear boy!), though with luck he'll return to the world of comics at some point, re-energised and ready to kick bottom.
The rather marvellous Malcolm Kirk will be taking over the helm from Issue 7 onwards (deadline to be announced).
Posted by David Hailwood at 14:22