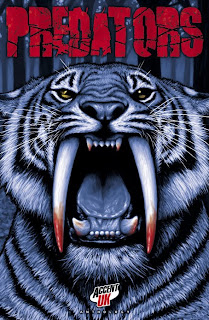 A few months back, Accent UK launched its latest anthology 'PREDATORS' which is another beautifully put together beast of a comic.

The anthology contains an 8 page collaboration by myself and Tony Suleri, titled 'The Exterminator'.

There's some terrific material inside, including a warped yet brilliant post-apocalyptic vision of a future ruled by giant mutated insects by Morgan Pielli and Jon-Mikel Gates, 'The Lure' by Gary Crutchley, involving a fairy used as bait to catch unwary children, 'Just Like You' by Lee Robson and Bryan Coyle, which is a well paced and darkly humorous piece about a very open serial killer, and many other great offerings.

Predators costs £8.99, and is available from www.accentukcomics.com.

Also, look out for their upcoming 'Zombies 2' anthology, which contains a 'Dead Beats' zombie strip by myself and welsh wonder-boy Neil Alexander.
Posted by David Hailwood at 13:53