For the last few months I've been working on an RPG Board Game titled 'Board Horde', and I've finally managed to knock it into a vaguely presentable sort of state. 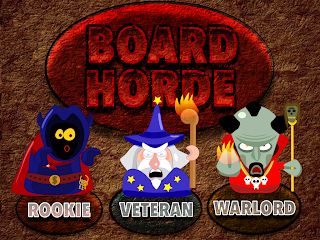 I still have lots to do (there's no sound yet, only three boards, various bits of art need changing or updating etc.), but I thought I'd post a link to it here in order to get a bit of feedback.


It will eventually be intended for larger touch-screen devices, as well as desktop, so feel free to test it on whatever you can (although it's touch screen enabled, a mouse should work as well) and report any findings. There's a couple of bugs which occasionally surface (the Change Places potion malfunctions from time to time), but if things go hideously wrong you can always press the Board Horde logo at the top of the screen to reset to the menu.

The basic aim is to get your three characters from the entrance to the exit before the other player (currently the game is for two human players, though I plan to put AI in, and a third player at some point).

You have three character classes, which have different strengths and weaknesses. They are as follows:


Mage: Best with potions, weakest against enemies, and has a medium chance of setting off traps.

Rogue: Okay with potions, okay against enemies, least likely to set off traps.

Warrior: Bad with potions (may suffer ill effects), best against enemies, most likely to set off traps (on account of having eaten one too many pies)

Haste: Doubles the characters moves.
Teleport: Moves the character forward a certain amount of squares (range differs depending on character class)
Invincible: If the character lands on an enemy, automatically wins.
Feather:  If the character lands on a trap, doesn't set it off.
Change Places: Switches places with the member of the opposition who is furthest ahead on the board.
Death Pulse: Destroys any enemies within a certain radius of the character (range differs depending on character class)
Slow Down: (only for warriors) Halves the movement speed on the dice (the number is rounded up, so it's still possible to move if you roll a one)
Enfeebled: (only for warriors) Gives the warrior the strength of a wizard when he next lands on an enemy.
Bloated: (only for Warriors) Sets off the next trap that the warrior treads on.

Anyway, that should be enough info to get you started. Feel free to make any suggestions for improvements (please bear in mind that the HUD profiles are out of date, and the text objects are in some cases there to replace SFX etc), and stay tuned for further updates!


Right, must go write those comedy sketches I've been promising Fran for the last month...