Not A Lot Of People Know That Vol 2 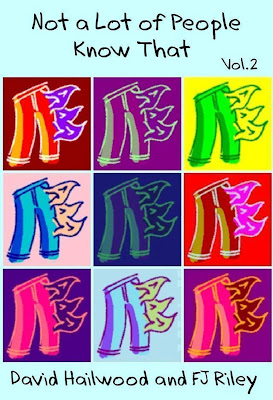 Huzzah!  The sequel to Not A Lot Of People Know That has just been released, and is free to download from Smashwords (with more online distributors to follow).

The book can be downloaded here:  https://www.smashwords.com/books/view/294899

Both myself and Fran were rather surprised at how well it's done (especially since the bulk of it was written on the bus, and in the pub).  Out of 240 free humour books on itunes, it's currently placed at number 2.  It's had several hundred reviews, and I've decided to capture my favourites from the Barnes and Noble site as some of them are quite brilliant.   It might also give you some indication as to why were we considering naming the sequel 'Marmite'...


‘If you enjoy satire and humor, you will LOVE this book!’ –blkeyesuzi


‘This was such a stupid book’ - Laura_V


‘Nothing really makes sense, but its not supposed to. Its trivia for the brain dead. Haha.’


‘Most of the stuff in there is either something a sicko would say or its not true.’


‘It's hilarious reading some other people's reviews. They say that the facts are hard to believe. Well that's because they are not real facts!’


‘If I read another review that uses the term fact in reference to this book, I'm calling the president and demanding more public school funding. This book was obviously intended as humor. For those of you who find some of the "facts hard to believe" there's good reason for it... your an idiot!’


‘Most of these facts I dont believe. I am a very skeptical person and this book, while interesting, really pushes the boundries of believable.’


‘Some facts are pretty interesting and other are hard to believe, but nonetheless I feel a little more knowledgable’


‘This book is one of the most entertaining things i have ever read!!!!!’


‘Any douche bag who hates this book has a lame sense of humor.’


‘Ok this book is really funny i mean it says stupied things but it is soooooooooooo funny.I really want to meet the author of this book and tell him/her how good this book is.You just have to get it.:)’


‘Every single word that spews from the author's hideous mouth is stupid and untrue. Rome wasn't built in a day, but this book probably was... Basically, it sucks the balls it tells you to cut off if you get measles!’


‘A good read if your not looking to use any brain power.’


‘Like a lot of things in this world, it doesnt make sense. But then maybe it does. A not so straight and square outlook on certain topics.’


‘This book isn't true so don't be upset if u read it and become dissapointed. But the book is really funny. My mom was having a bad day and I let her read some of the book it completely made her day. This "fact" book is definitley a favorite of mine and don't think yuck facts.’


‘To every one who called this book stupied: GET SOME SENSE OF HUMER ANYONE WHO CALLED THIS BOOK STUIPIED YOUR SO FAT AND UGLY U DONT KNOW WHAT UR TALKING ABOUT. To al of u who said it was funny awesome cool and halares : u are awesome’


‘it would have more value as a weight for your recycle bin.’


‘There were probably about 500facts in this book i never even knew existed!’


‘Not the slightest bit accurate’


‘it was difficult to tell fact from fiction.’


‘So is all the stuff in the book true as in real proven fact?? I dont get it if this book was a joke book or a fact book.’


‘This book is funny and there was some cool facts. But some i didnt believe, like this one (pg. 64: Until the 18th century, castration was the only way to cure measles.) Castration is cutting off your balls for men. To women, ovaries. You would cure measles but youd die anyway thanks to having no balls!’


‘Typo, "...not a lof..." That's hilarious’ (Authors note:  Blast!  Someone noticed!  Fortunately we paid a higher grade of monkey to write the sequel (after they’d finished ghost writing their latest Barbara Cartland novel) so with luck there will be less spelling errors)


‘My school bought like 300 copies of this. It was waste od their money.’ (authors note: quite right, since it’s FREE!)


‘It was ffunny and claver but kinda stupid’


‘My favorite was "if u drink pepsi and coke mixed together u will die." Its funny cuz ive done it b4.’
Posted by David Hailwood at 13:15