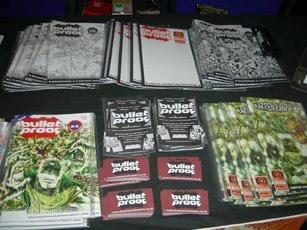 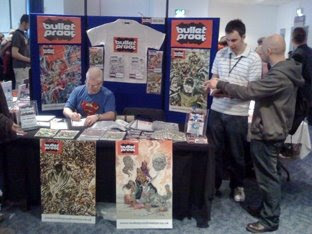 There's a nice report up at the Bulletproof website of the Birmingham International Comics Convention, partially run by me old mate Shane Chebsey. Thought I'd nick a few photos to post here (taken by Matt Yeo, I'd assume. Except the one that he's in, which was most likely taken by someone else) as their stall looks rather eye catching. (Pictured are Tim Perkins of The Wizards Keep, Matt Yeo, and, er, Some Other Chap)
Also me and Tony's Marren Kane 12 page sampler comic is now available to buy for a quid on the site's shop at http://www.bulletproofcomics.co.uk/online-store.php 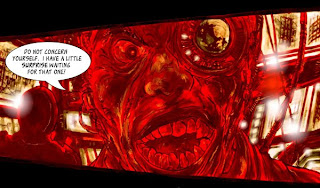 We're hoping to finish the comic off when we get the chance (it's more likely to be a one-shot than a mini-series), though we've got a lot of projects planned for the new year that'll demand our attention first (including the Technofear collection to be released through Bulletproof, and another long running series we've been planning for quite a while).
Posted by David Hailwood at 22:08