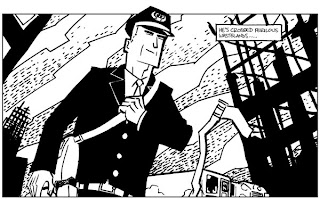 My contributors copy of Bulletproof 2 came through today (along with a rather snazzy looking Marren Kane 0), and it looks like another well presented offering.
The addition of colour to almost half the comic is a welcome change, and ensures that John Freeman and Mike Nicoll's Ex Astris strip really stands out from the crowd. The 3d graphics style has never looked better, and I was very pleased to see some bloodshed, violence and nudity had been added into the mix. Hurrah! Definitely my favourite of the bunch.
Alan Burrows artwork on Funguys (concerning the adventures of two hard drinking party crashing alien mushrooms) is also a visual treat, with plenty of freaky-ass aliens to feast your eyes upon. The only thing I found slightly odd about the strip was that is seems to take place in Dec 31st 2009, and, er, Clinton pops up as President of America. My guess is that the date was changed from 1999 so that the strip wouldn't appear so old, though since the Funguys are time travelling mushrooms this was unnecessary, and might provoke pernickety little gits like me to make pointless comments such as the one I'm making right this very moment (it's also possible that it's just a typo, but that's far less dramatic).
Sideburns is another strip that's growing on me, with some mighty fine artwork from Jon Haward and an amusing story by Jim Alexander (well, the idea that a criminal would be brought to justice when the detective realises he had his fingers crossed behind his back amused me anyway) .
Plenty of other good strips in the issue, but I'm bored of talking to myself and must depart, in search of that mystical substance known as 'lunch'.
If you haven't brought yourself a copy yet, it's only three quid and available from http://www.bulletproofcomics.co.uk/. I've got some strips in there, but don't let that put you off - it's actually a bloody nice read.
Oh yes, and here's some previews from a few strips appearing in Bulletproof 3; Bunk Mates, by Paul Harrison-Davies, and Backtrack by Tony Suleri. Plus there'll also be a One Eyed Wench strip illustrated by Dave Thomson. 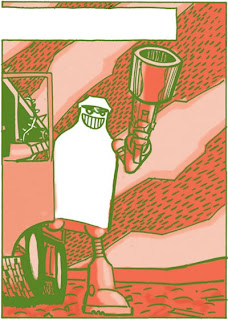 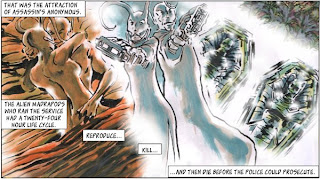